The Ewes, present in Togo, Ghana, and Benin, mark their funerals with a photographic portrait of the deceased. The hieratic portrait of the deceased person is a photograph produced while the individual was still alive and is often touched up, embellished, and framed by the talents of a professional photographer, in order to satisfy the deceased and reassure the living that the rites have been respected. The portrait, thanks to the inherent properties of photography, guarantees the presence of the deceased through a living image and facilitates their transition towards the world of the ancestors (who are considered alive for the Ewes), the world beyond that it is perpetual contact with ours, here below. It accompanies the ceremonies (Voodoo and/or Catholic) and is also presented alongside the corpse, subsequently providing a unique mortuary portrait. It is also found in the death notices, televised announcements, and on social networks, also serving as a model for the creation of the painted or sculpted portrait on the tomb. While the funerary effigy was once the prerogative of well-off families, particularly among the Yoruba from whom the Ewes borrow a number of cultural and aesthetic traits, nowadays, the funerary portrait allows the wider community to celebrate their dead. 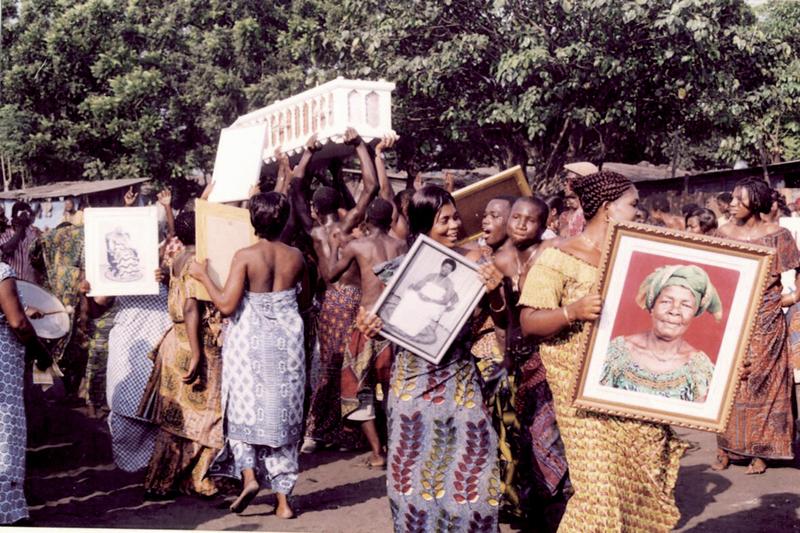 C. Angelo Micheli is a historian of African art. His research focuses on the representation of twins in contemporary African culture. He has notably curated several exhibitions on this subject, including a show on contemporary African photography at the Galerie Dettinger-Mayer (Lyon) as well as “Gémellités” in 2012 and “Femmes d’Afrique: Regards croisés” in 2017 at the Musée Africain de Lyon. Among other writings, he has published “Double Portraits. Images of Twinness in West African Studio Photography” in Philip M. Peek (ed.), Twins in African and Diaspora Cultures (Indiana University Press, 2011), and “Les photographies de studio d’Afrique de l’Ouest. Un patrimoine en danger,” Africultures 88 (2012).